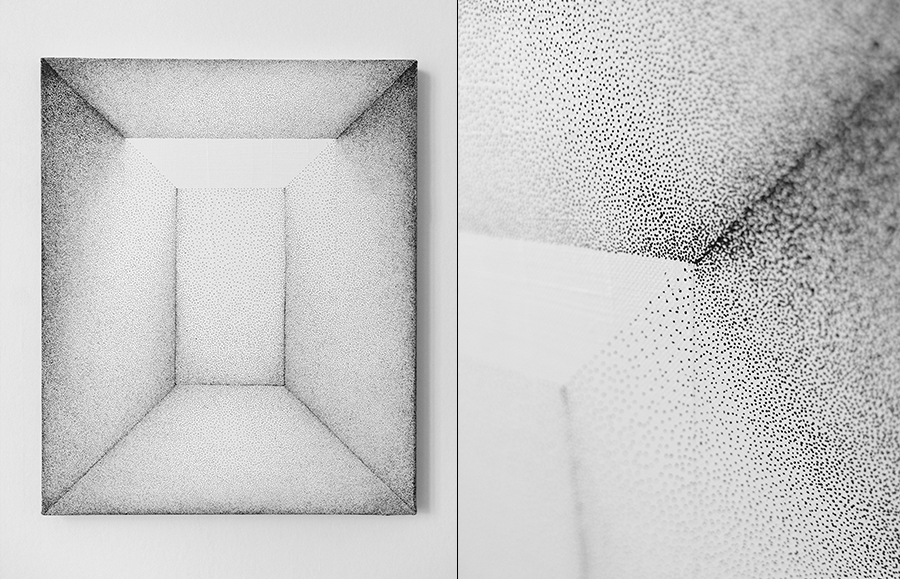 I wanted to make something both personal and completely impersonal. The idea behind this paradoxical thought was to make a painting with a patent lack of gesture. Hence, I choose to do it with dots. A dot has no direction, anyone can do it, even a child. It is the result of one identical and redundant movement. I’ve always liked the idea that anyone can do “art”. Art is only a matter of expression catalyzed through aesthetic. It’s not the medium, nor the gesture that makes art, but the cognitive process behind it. And as we are rational beings, it is important for us to explain what we do and why we do it. the things we do have to make sens. And thus, art without theoretical thinking is nothing but pure esthetic. Even though it is quite tempting to judge pure esthetic, it remains thoroughly personal and subjective.

And so, the shadows are nothing but a dense area clouded with black dots. The canvas itself is only a work of patience en observation. It requires no other skills. The space we see is theoretical, born from pure imagination on one hand, and from a very faithful observation of light and the way it bounces through hard surfaces, on the other. It looks at the same time very accurate from afar and completely random when up-close. The picture is black and the canvas is white. the shades of grey are created by your mind only. The same technique was used by impressionists and old printing companies to make complex colors only with red, yellow and blue dots.

It teaches how to take a step back, and look at things from afar. Because being close to the canvas doesn’t allow an overall point of view. Sometimes I got stuck in an area that was too dense and the only way for me to get away with it, was to stop, and come back days and days later. It also teaches patience, obviously. But with it comes sort of confusing feeling, because at some point you want it to be finished, but at the same time, you never know when it will be. So the sentiment of accomplishment can never be fulfilled. It’s like being stuck in a loop, you are in a constant state of reaching something you can’t even get close to. To be honest I don’t know if I am done with the painting yet. I might come back to it in some years, after months of observation.