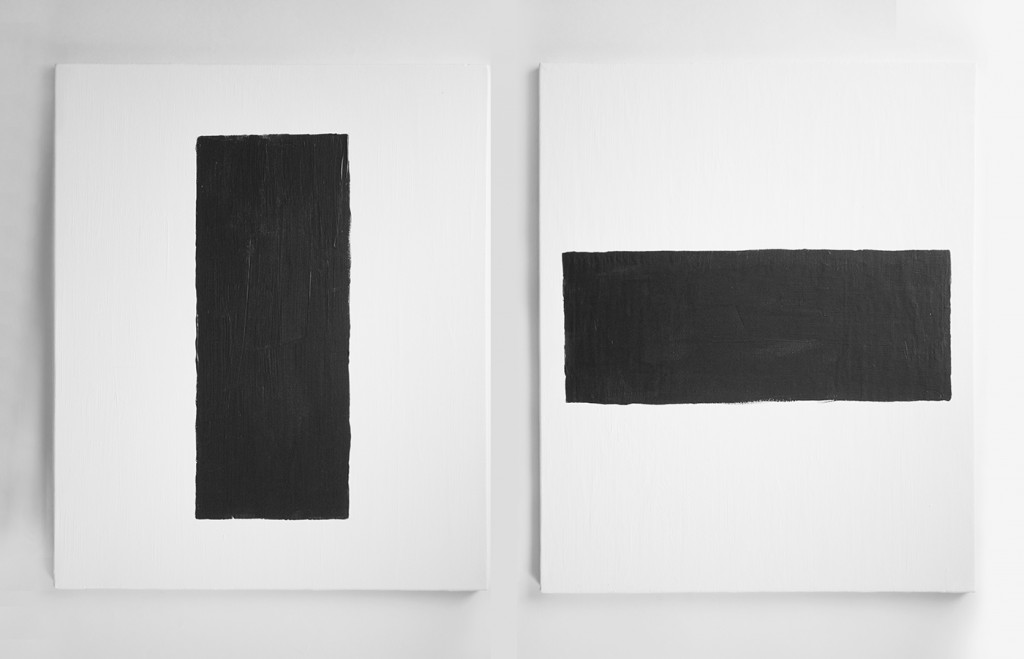 At first glance, when you look at these two paintings, nothing may happen. Then you read the title, and you wonder why you are seeing one vertical rectangle and the other one horizontal, while the title is clearly stating : two vertical rectangles. At first, you might think that I am wrong, then a second later, you are asking yourself if you are not missing something out. You’re telling yourself that you might be wrong, which will push you to look closer, to try to understand why the title doesn’t fit with what you clearly see on the paintings.

Well, let me tell you that I’m not wrong and neither do you. We’re both seeing something else from the same diptych. Your perception tells you that one rectangle is vertical, and the other is horizontal, which is basically true, but are they really rectangular surfaces ? To be so, they have to fit in this accurate description : “A plane figure with four straight sides and four right angles”. So the black rectangles you see, are a mental representation of a rectangle not a real rectangle. It’s a rectangle which exists only in our common and approximate vision of what a rectangle has to look like to be a rectangle, but it doesn’t exactly fit to the definition.

If you look a bit wider, you might notice that the only real rectangles here are delimited by the frame, in fact, the vertical rectangles are the frames themselves. So,  to see it with my point of view you have to let your eyes escape, instead of focusing at the black surfaces.

I think that there’s always multiple ways to look at things and to understand them. This is the proof that even the truth depends on a personal perception given by one another.